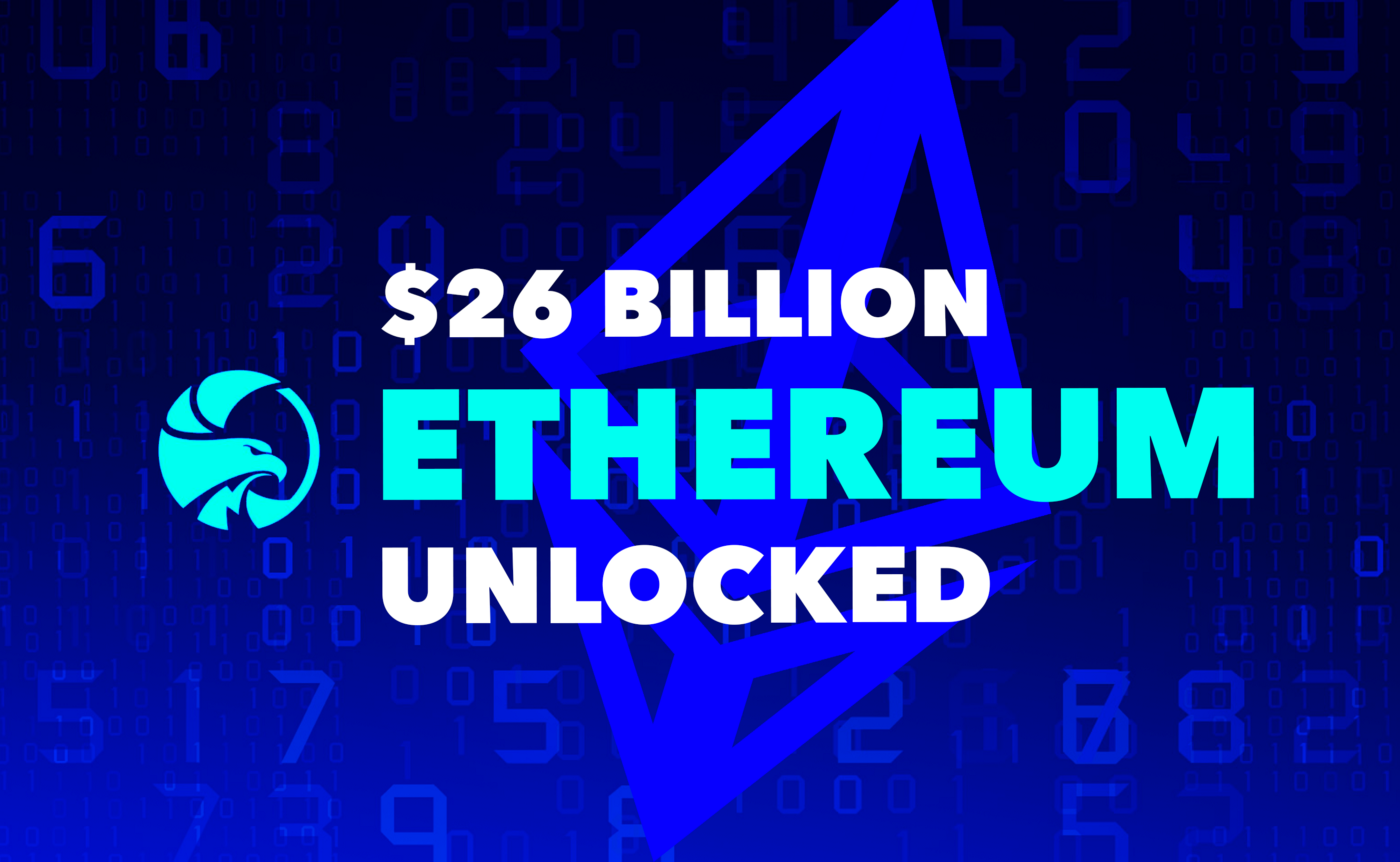 Despite years of constant delays in the release of the Ethereum Consensus Layer, the foundation confirmed earlier this week that it is now expected to be launched as soon as August 2022.

Many have referred to this event as “the Merge”, and there’s been much excitement surrounding this event. As we know, Proof-of-Work is a system that essentially requires lots of effort and computing power to keep the applications secure. Even the developer of Proof-of-Work, Hal Finney, has voiced his concerns over his invention, due to the huge energy consumption required.

While Proof-of-Stake will be a huge upgrade to Ethereum, it does come with some concerns as well. For instance, there is currently over 13 million Ethereum staked in ETH 2.0, worth nearly $26 billion.

Once the merge is complete, this $26B will be unlocked, and flood the market as investors unstake and potentially sell the news. With the current bear market now in play, and lots of fear consuming the space, we could see an even larger decline in the coming weeks and months.

However, not everyone agrees that this could result in a crash. A Self-proclaimed DeFi educator and member of ‘DeFi Omega’, Korpi87 broke down the potential impact of The Merge and the resulting unlocking of millions of ETH in a lengthy Twitter thread.

Korpi pointed out that “the Merge won’t enable withdrawals,” as that is “planned for another Ethereum upgrade” slated to occur after roughly 6 months to one year. Korpi explained further that:

“To withdraw $ETH, a validator must exit the active validator set but there is a limit to how many validators can exit per epoch.

There are currently 395k validators (active + pending). If no new ones are set up (highly unlikely), it will take 424 days for all of them to exit.”

Unlocked ETH will be released slowly

Korpi elaborated that even with withdrawals enabled:

“there will be an exit queue which may take more than a year in the worst-case scenario or several months in a more realistic one. The release will be slow.”

Korpi’s says that The Merge will not result in a major sell off as most users who have staked ETH with validators are most likely ETH-maximalists and are not interested in selling at current prices.

Further, there are already ways for ETH stakers to access liquidity from their staked tokens. For investors who are not running their validator nodes, it is common to receive tokens such as bETH in return for staking ETH with a validator.

These bETH tokens are tradeable on the open market, thus releasing liquidity. Therefore, those investors who are not already a part of the validator infrastructure do not need The Merge to happen to access their liquidity in most cases.

Suppose investors wish to cash out of their staking position; they can sell their bETH tokens. Korpi curated ETH liquidity staking by the platform into the table below, which makes up just 35% of all ETH staked.

In summary, Korpi, who has a backlog of DeFi related information, states,

“I don’t believe we will experience any inflated dumping due to $ETH unlock. It will take place in many months, will be slowly released and many stakers won’t be selling anyhow. My bullish view is intact. ETH will melt faces after the Merge.”

The worry about a vast unlocking of capital after The Merge may be misplaced. Those who want to trade staked ETH can already do so via liquidity products, and those who are running their validators are unlikely to sell on launch.

An investor who has set up a node and has 32 ETH staked over the past few years is invested in Ethereum’s future. It hardly makes sense to stake ETH and then sell and decommission a validator node as soon as it becomes a viable part of the ecosystem. As many in the space have commented,

The Merge may well not be priced in due to skepticism. Often the rule is, “buy the rumor, sell the news.” However, in this case, investors who are not staking their ETH already could potentially be waiting for confirmation that The Merge will be successful.

Perhaps the single best argument that can be made against Ethereum, is that transactions can be really expensive. Transactions on Ethereum require “gas”, which is another way of saying computational effort, and this gas is paid for in Ethereum. The higher the computational effort, the more gas is needed and the more ETH you have to pay per transaction. The other issue with Ether’s gas fees is that they can vary a lot depending on the time.

In the chart above, we can see how Ethereum gas prices have evolved in the last week. Though there does seem to be periods of stability, where the price oscillates at around 100 gwei, we see repeated spikes. On October 1st, gas prices nearly reached 800 gwei.

Ironically, it is precisely Ethereum’s popularity that leads to the network congestion (there is limited space for gas on each block) that in turn makes using Ethereum rather unappealing.

Ethereum’s high gas fee has been a concern for many, and is a key hurdle in the platform’s scaling ability. Now, investment bank JPMorgan has said that the platform is losing ground to rivals like Solana in the non-fungible token (NFT) sector due to these high gas fees.

At the time of writing, the gas fee was averaging at around $51, but the value has been known to jump to over $200 quite often since it depends on the traffic on the network.

“It looks like, similar to DeFi apps, congestion and high gas fees has been inducing NFT applications to use other blockchains,” said JPMorgan analyst Nikolaos Panigirtzoglou, in a note. “If the loss of its NFT share starts looking more sustained in 2022, that would become a bigger problem for ethereum’s valuation,” he added.

Panigirtzoglou isn’t the only one who feels this way either. To be sure, Ethereum’s market capitalization has dropped from a massive $568 billion in August 2021 to around $320 billion today.

On a related note, Ethereum transactions could also be defined as slow. Supposedly, Ethereum can carry out 13 transactions per second. Meanwhile, it is estimated that the demand is close to 1.355 million TPS every day.

Ethereum is slow, compared to payment processors like Visa Inc and Mastercard Incorporated, but it is also slow compared to lots of cryptocurrencies, especially some of the new ones. Of course, the people behind Ethereum are trying to do what they can to remedy this through meaningful updates. However, the biggest thing Ethereum can do in this regard is a move towards Proof-of-Stake, rather than Proof-of-Work, which could prove to be a very difficult task.

Using PoW also had the disadvantage of consuming large amounts of electricity, which has been deemed by many as environmentally unfriendly. PoS offers an alternative to this, though not without costs.

Ethereum is in a Bear Market

While I think it’s important to hear all sides of the story, hence why I included Korpi’s point of view, I still have my opinions that we’re heading much lower.

As a long-time Ethereum investor who got in when it was just a few dollars, I will say that this heavily manipulated crypto cycle proved just how overvalued this token had become. Boosted largely by the manic-fuelled NFT bubble, and worthless Ethereum tokens, the extremely high fees and slow transaction times are something that people are just tired of.

There are much better competitors that have solved the flaws of Ethereum years ago, and this merge will only add more supply to be dumped, and act as a “buy the rumor, sell the news” event, where investors dump after it occurs.

Ethereum is in a bear market, and has been for several months. This merge may be seen by many Ethereum investors as a new paradigm for the cryptocurrency, but I just don’t see the hype returning anytime soon.

Thank you so much for reading! It would be much appreciated if you could share this article on social media, comment your thoughts below, and give a like!