Here’s Why El Salvador’s Bitcoin Experiment Will Be A Total Disaster. 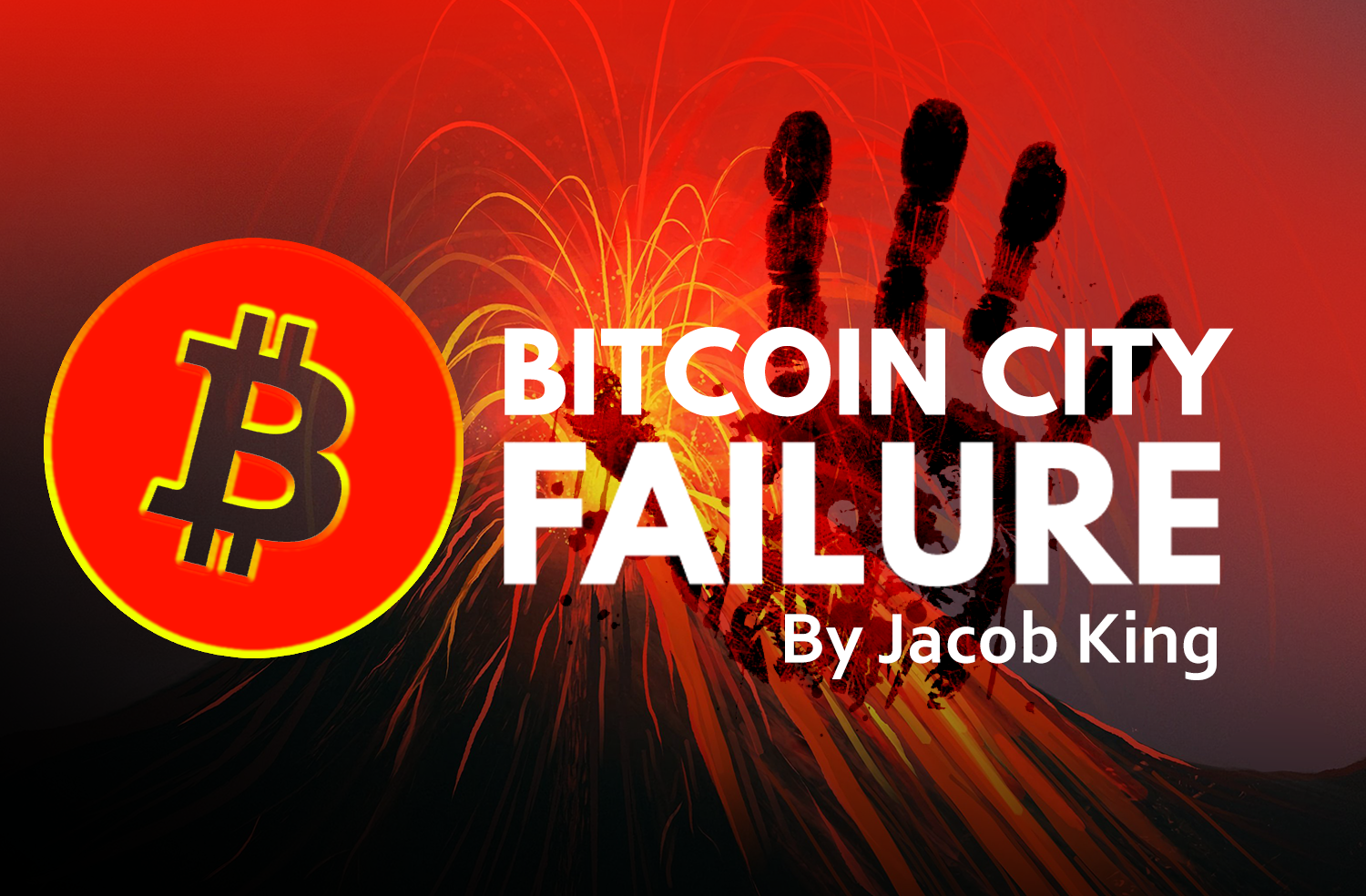 In 2021, we saw something in the crypto space that we’ve never seen before. The first sovereign nation in history decided to take the risky decision in adopting Bitcoin as legal tender — a move praised by Bitcoin maximalist yet despised by the Salvadorian people, and economists across the world.

Several months after becoming legal tender, El Salvador’s President Nayib Bukele hosted a promotional Bitcoin event in the small town of Mizata. During his speech, he announced his country would be developing the world’s first ever ‘Bitcoin City’ in El Salvador.

While many specifics about this project are still unknown, it does open a extensive list of concerns about the viability and success of such an outrageous idea. The announcement also conveniently came after a lengthy correction put all of El Salvador’s Bitcoin bets deep underwater, which begs the question as to whether this announcement was simply a marketing stunt in hopes of attracting new hype, which clearly didn’t work out well.

Bitcoin City is being sold to the public as this beautiful perfect city with zero taxes, and no carbon emission, but how realistic is this? Not a chance.

I have serious doubts this city will even be built, let alone be a supposed success haven for crypto bros and financial elites, which are already capitulating out of Bitcoin as the market mania cools down.

Despite many Bitcoin maximalists promoting this false idea of unity, and success with their Bitcoin experiment, the opposite is true.

Once Bitcoin became legal tender in El Salvador, it immediately triggered thousands of massive protests across the country, and even resulted in the jailing of dozens of journalists and critics.

A recent study from November 2021 found that a whopping 91% of the population opposes Bitcoin, and prefers the U.S dollar.

The governments “Chivo” wallet had a failed launch, is slow, has high fees, and isn’t reliable for day to day transactions. The government also fails to mention how they have complete centralized control over everyone’s funds with this wallet.

Bitcoin was originally designed to counter just this, yet we see nefarious dictators and authoritarians desperately seeking to use these deceptive tool to gain even more control over their citizens. Fortunately, the people are waking up, and noticing.

For a currency to be successful, it needs acceptance. It’s been months since Bitcoin has been made legal tender, yet nobody is using it. They’re reverting back to the U.S dollar which is a huge red flag, and not a good sign of Bitcoin’s ability to seek long-term adoption.

In over 12 years of Bitcoin’s existence, the only country that adopted it had to force it among their citizens, yet they refused it just months later.

Not a good look.

The 39-year-old Bukele is by far the most popular politician in Central America, a region plagued by corruption and criminality. His New Ideas party swept legislative elections by a landslide and Bukele, who cultivates the image of a hip pragmatist, has sought to leverage China’s growing influence in the region to court new foreign investment.

Bukele has strong ties to China, and has even been caught doing top-secret deals with MS-13 gang members. Something many don’t know about.

When it comes to Bitcoin, we’ve seen a common trend of its supporters using lies, propaganda, and narratives in order to influence others to buy.

Why? Because they want the prices to rise, thus making them more money.

Many in the crypto space look up to people like Nayib Bukele, although the irony lays in the fact that he’s a dictator who’s spread nothing but lies.

You’ll notice many times when Bitcoin is tanking, he puts out a tweet saying he bought millions worth of Bitcoin. Not only does exchange data show no large purchases to any of his wallets during these times, but his administration has refused to provide evidence to many journalists who’ve asked.

That’s because there’s a little to no chance that they even bought anything. They simply use this as a ploy to lure in other greedy investors. Unfortunately for them, it isn’t too effective.

Bitcoin has tanked significantly, and all of El Salvador’s buys are currently at a loss. And I presume those losses will remain their, and expand in the future.

Bukele has put his country into a deep financial crisis. They simply don’t have nearly enough money to fund projects, let alone the $20 billion needed to build the Bitcoin city. With that, El Salvador decided to issue “Bitcoin-backed bonds” which truly are as sketchy as they sound.

Blockstream’s Chief Strategy Officer, Sam Mow revealed that the first issue would be a 10-year Bitcoin bond called “The Volcano Bond” which will be valued at $1 billion USD and carry a coupon (interest payment) of 6.5%.

Half the value of this initial bond ($500 million) would go to buying even more Bitcoin on the market. Mow, went on to say that after a 5-year lock up period, the ‘Volcano Bond’ would return an even higher coupon rate, as he expects the price of a single bitcoin to rise to $1 million USD by 2025

Bitfinex was named the official “book-runner” of the world’s first Bitcoin-backed bonds, which while technically based on the value of Bitcoin, will still be denominated and paid out in USDT (Tether), all of which, will be facilitated by Blockstream’s Liquid Network.

Tether’s massive role in all of this comes to absolutely no surprise to me, and others who’ve done extensive research into this Ponzi schemes shady past.

Tether is essentially one of the largest frauds in history. This corrupted Chinese firm illegally prints billions of unbacked digital dollars from thin air, claiming they’re backed 1:1 with the U.S dollar, then injecting it into Bitcoin and alts to manipulate prices upwards.

This has created an enormous market bubble which I often compare to a giant game of musical chairs, where the music will stop at any moment. The growth of Bitcoin is often seen as a result of the extreme inflation fears following the quantitative easing spree by governments around the world. Yet, inherently Bitcoin isn’t an inflation hedge and has never been one.

Tether knows the importance of having strong narratives as it brings suspicion away from them. This is why they’ve partnered with El Salvador to push this project so hard, while simultaneously hijacking the markets.

El Salvador’s currency is the U.S. dollar. Therefore, in order to effect this change, El Salvador partnered with Strike, a mobile app which will supposedly let El Salvadorians living abroad to send money back home, cross-border, for free. Virtually any conversation about currency for El Salvadorian citizens has to start here, because almost a quarter of them live in the United States.

Guess how the Strike app is powered? Using a proprietary version of Block stream’s Lightning Network.

Guess how Strike works? By taking the dollars of the El Salvadorian people wanting to send money back home, using that money to buy BTC, sending those BTC to El Salvador, converting them to Tethers, and then depositing those Tethers into the recipient’s Strike account. It is Tether that El Salvadorian recipients will receive; not any form of Bitcoin.

That’s right: while the country’s so-called Bitcoin Law is being celebrated from every corner of the BTC community, it quietly turns out that as with most things in crypto it is Tether, not BTC, that is the real story.

Bitcoin Fails as A Currency.

By analyzing charts of 22 foreign currencies going back over 2 decades and comparing it with Bitcoin, we can understand just how risky Bitcoin is.

Data shows that Bitcoin is around 430% riskier than the Brazilian real and about as risky as the Venezuelan bolivar, a country experiencing hyperinflation. El Salvador is embarking on a risky course that may not end well.

What’s interesting is that half the currencies (excluding Hong Kong) depreciated, and the other half appreciated, indicating that over a reasonably long period of time, there’s usually no reason to expect the U.S. dollar will either appreciate or depreciate relative to most foreign currencies, but we can expect shorter-term movements. It isn’t clear that today we could say the same about bitcoin, which might dramatically appreciate or depreciate in U.S. dollar terms over, say, the next five plus years.

This chart looks at the last seven years (since U.S. regulators approved the first derivative product involving bitcoin) and compares the volatility or risk (as measured by the annualized standard deviation of daily exchange rate changes relative to the U.S. dollar) of the various currencies including the Venezuelan bolivar, as well as bitcoin price changes.

What’s striking to me is how much riskier bitcoin is to all of the other currencies with the exception of the Venezuelan bolivar. Bitcoin is about four times riskier than the Brazilian real, and a similar order of magnitude as the bolivar.

A critique of envisioning bitcoin as a “stable currency” and medium of exchange is that it’s just too volatile, and this chart further proves that. Unless you have a huge appetite for risk, I don’t think many investors would even consider buying or selling Venezuelan bolivars, and yet there seems to be a huge appetite for investing in bitcoin as well as other cryptocurrencies.

Now let’s do the same type of calculation for El Salvador, which has around $3 billion in reserves. While the country currently has just under 1 percent of reserves in bitcoin, let’s suppose that amount got up to 50 percent, or $1.5 billion. If we use bitcoin’s standard deviation of around 74 percent, that implies there’s a one-in-three chance that reserves would be depleted by $1.5 billion x 0.74 or $1.1 billion, about a third of total reserves. Of course, it’s quite possible that the pendulum might swing the other way, in which case the country would experience a huge windfall. But is El Salvador, or any country for that matter, ready to take on the incredible amount of risk associated with this?

El Salvador has made a huge bet. This will either leave their country in even further financial ruins, or reign in a new wave of innovation and prosperity that the world has never seen. While it’s nice being optimistic, we must not ignore reality. The Bitcoin experiment will likely end with tears.